Known as palmier in their native France, but as pig’s ears to the rest of us, it is easy to understand why so many across the world have fallen for these sweet, buttery treats! After all, what’s not to love? A delight on their own or dunked in coffee, these wonderfully simple pastries are hard to resist.

Even though they may look complicated, palmier are anything but, and are actually surprisingly easy to make at home. In fact, they are quite possibly the simplest pastry I’ve ever attempted! Requiring just two basic ingredients, palmier is one of the most economical sweet treats you can make: all you’ll need is a roll of store-bought puff pastry, a cup of sugar, some folding skills, and that’s it!

As with all pastries, the temperature of the dough is essential. In this instance, it must be fully defrosted, but still chilled. If it is too warm, the butter in the pastry will melt too quickly in the oven – you won’t get a crisp finish as the butter will ooze out of the pastries and burn. It is best to defrost the puff pastry in the fridge overnight so that it is ready and waiting for teatime the next day.

Personally I don’t like to use too much sugar, instead preferring to give them a quick dab of apricot jam when they are fresh out of the oven – the sweetness of the glaze is enough for me, but this is entirely down to taste. Whilst on the topic of preferences, I like my pastries to be slightly on the “burnt” side, but if that’s not your thing then just take them out of the oven a couple of minutes early.  If you would like to expand on the traditional butter and sugar recipe, you can always add a teaspoon of ground cinnamon to the sugar.

To discover other delicious Sweet Treats from The Muddled Pantry, please click here

END_OF_DOCUMENT_TOKEN_TO_BE_REPLACED

The ultimate bittersweet nibble, these truffles work well as a final flourish to a dinner party with a glass of cognac, port or even as a sneaky chocolate treat to be had when nobody’s looking.

I first had these truffles many years ago when I moved to Cape Town. My dear friend Eloise made them for me once as a thank you gift for inviting her family to dinner one evening. As it was the first time I had met her she was blissfully unaware that I’m lactose intolerant so I just passed the thoughtful gift on to my partner (who is a chocolate-fiend of note) and didn’t think about them until the next day.

As it turned out, the truffles weren’t to my partner’s taste at all as they weren’t as sweet as he would have liked. More surprisingly, however, they turned out to be right up my street! I’m not normally a ‘sweet’ person, but every now and again there are exceptions to the rule and these are most certainly that – exceptional!

Bitter, sweet and with a hint of whisky; these little chocolate gems are most definitely worth the consequences of lactose intolerance and that’s not something I say lightly.

END_OF_DOCUMENT_TOKEN_TO_BE_REPLACED 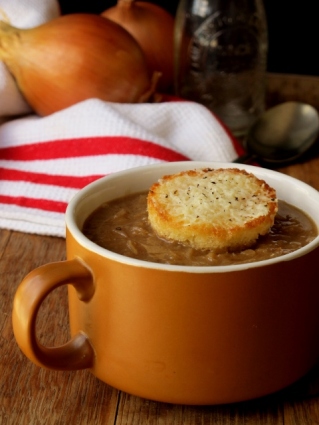 We’ve all been there – you’ve got nowt in your pantry other than a few onions, a stick or two of butter and half a bottle of wine in the fridge? Believe it or not, you have virtually all the ingredients necessary to whip up a true classic – French onion soup!

A tragically maligned stalwart of French cuisine, onion soup is a relic of 80s bistro fare that most of us are simply just too cool to admit to liking these days. Once considered the epitome of a classic soup, this wonderful dish has been woefully neglected in recent years; a travesty that bares testament to the fact that even the greatest dishes can eventually fall out of favour. Food fads and fashions come and go, but French onion soup deserves so much more and is, finally, enjoying somewhat of a revival and is being appreciated for the old school classic that it is.

So why, oh why is a good French onion soup still so hard to come by these days?

Sadly for what it lacks in fancy ingredients, French onion soup demands in effort and undivided attention, which is probably why a good bowl of this sweet and sour delight is so difficult to find. Simply given the sheer amount of time needed to diligently ‘guard’ your onions against burning, I sometimes doubt making this soup is always compatible with the rigours of a modern commercial kitchen and is, perhaps, more suited to home cooking. Not that I want to put you off, but making good French onion soup is the culinary equivalent of watching paint dry and should only be made when you’ve got the time to do it properly, without any distractions. After all, like so many French classics, onion soup is about transforming the humble into the divine and if that was meant to be easy, it simply wouldn’t be French.

END_OF_DOCUMENT_TOKEN_TO_BE_REPLACED 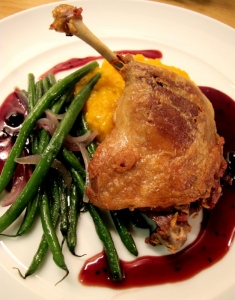 Let me be clear from the start – French food freaks me out.

Alarmingly sophisticated, I have always been wary of making it at home and, on the face of it at least, with good reason. Widely regarded as the pinnacle of Western cuisine, French food seems to thrive on its reputation that it is impossibly complicated and perceived to be beyond those of us not blessed to be born French, or trained in the art of cordon bleu cooking! The truth is that neither of these “prerequisites” should be an impediment to whipping up your favourite French delight!

Generally speaking, much like many of the world’s other great cuisines, French food is all about making simple food exceptionally well. The devil is in the technique, but thankfully this can be mastered, or at the least, approximated. Armed with the weighty Larousse Gastronomique and some self-confidence, there is no reason why you can’t be tucking into your favourite bistro fare come dinner time.

Which brings me to this recipe. Perhaps the epitome of French cuisine, duck confit is simplicity made complicated, or at least so it seems. To make a confit is, in essence, an act of preservation – in this instance with duck. Whilst the preservation and cooking process is quite lengthy, it isn’t actually particularly complicated, but attention to detail is paramount. Every step of the recipe is essential, and I recommend one reads through the recipe a couple of times to familiarise yourself with the cooking process before starting. Duck Confit is not a recipe that should be rushed, so a certain amount of planning is required when making it. Effectively a dish that takes up to the better part of two days to prepare, don’t think to buy your duck in the morning and expect to be serving it come that evening!

One of the best things about duck confit is its near immortal shelf-life. Stored correctly in the refrigerator, duck confit can be kept for as long as 6 months, making it the ultimate pantry item – perfect for impromptu dinner parties or a special treat!

With all that said, duck confit’s meticulous preparation, prolonged curing time and languid cooking process shouldn’t deter you from making this dish! After you’ve made it once, you’ll realise that it is surprisingly straightforward and is not as complicated as it initially seems. After all, this is French cooking we are dealing with here and it wouldn’t be French if it didn’t at least sound intimidating!

END_OF_DOCUMENT_TOKEN_TO_BE_REPLACED

Along with its Provençal cousin bouillabaisse, Salade Niçoise is the perfect example of peasant food made good! 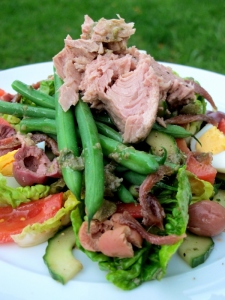 Hailing from the Cote d’Azur in the South of France, Salade Niçoise has always been popular and is considered one of the classic salads of the world. Whilst it’s undeniably a dish of humble beginnings, its ingredients have grown in sophistication, along with the salad’s popularity. Quail eggs, seared bluefin tuna steaks, asparagus – all have found their way into Niçoises the world over.

Whilst traditionally the inclusion of tuna in a Niçoise Salad is by no means a given, there was a time when good-old tinned tuna would suffice. Nowadays however, seared tuna steaks seem to have become the norm in swankier eateries. Controversially, I personally still prefer some good quality tinned tuna over a slab of seared tuna any day! Not only do I think it’s a criminal waste of precious, overpriced tuna, it is also often a tad bland and doesn’t stand up well to the intensity of the other ingredients. Good tuna deserves to be the star of the show and in a Niçoise, though, it is often lost in the riot of competing flavours. Save it for sashimi, I say.

It seems, however, that I’m in the minority in my tuna preference. So much so, I’ve even had waitrons apologizing because the Niçoise salad on the menu was “just” made with tinned tuna. They usually seem a bit surprised when I order it in spite of their dire warnings and forebodings! The truth is that a lot of things can make for a bad Niçoise salad, good quality tinned tuna isn’t one of them, but if seared is your thing, please don’t let me dissuade you!

These days just about anything passes as a Niçoise salad, in fact, there is really no definitive version of this classic French salad. Whether it be the anchovies, tuna or potatoes, everybody seems to have their own ideas with regards to which combination makes for the perfect Niçoise. To be honest though, as with most things, it really comes down to personal taste. Carb-conscious? Ditch the potatoes. Not fan of tuna? Leave it out. Hate anchovies? Eat a different salad!